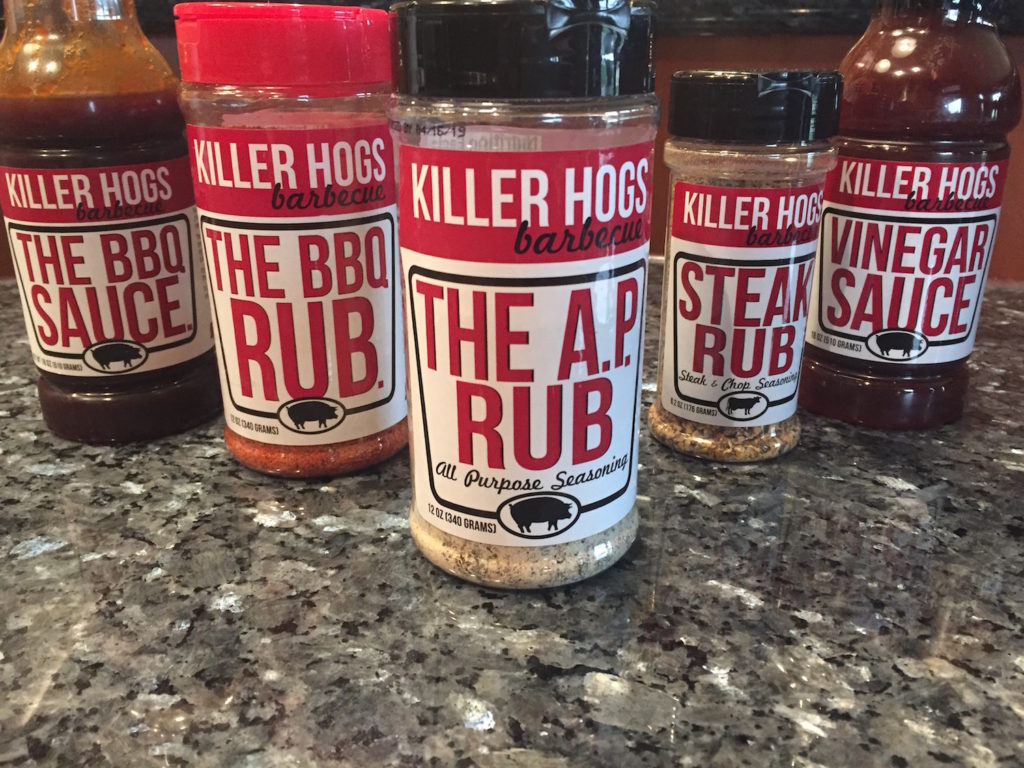 Every now and then you try something new and it’s so good it becomes your new standard. That’s what happened to us this summer after discovering the Killer Hogs line of sauces and rubs.

Killer Hogs is in fact an award-winning (many times over) bbq competition team comprised of brothers Malcolm and Waylon Reed. These guys know what they’re talking about, and they love sharing their passion as is evident in their friendly, entertaining and very useful bbq tutorial videos.

Their products are truly worthy of their reputation: flavourful, super versatile, and awesomely tasty in every mix-and-match combo we’ve tried. We highly recommend that you grab some for yourself.

What I’m finding myself most excited about is this gem below, Killer Hogs A.P. (All-purpose) Rub. 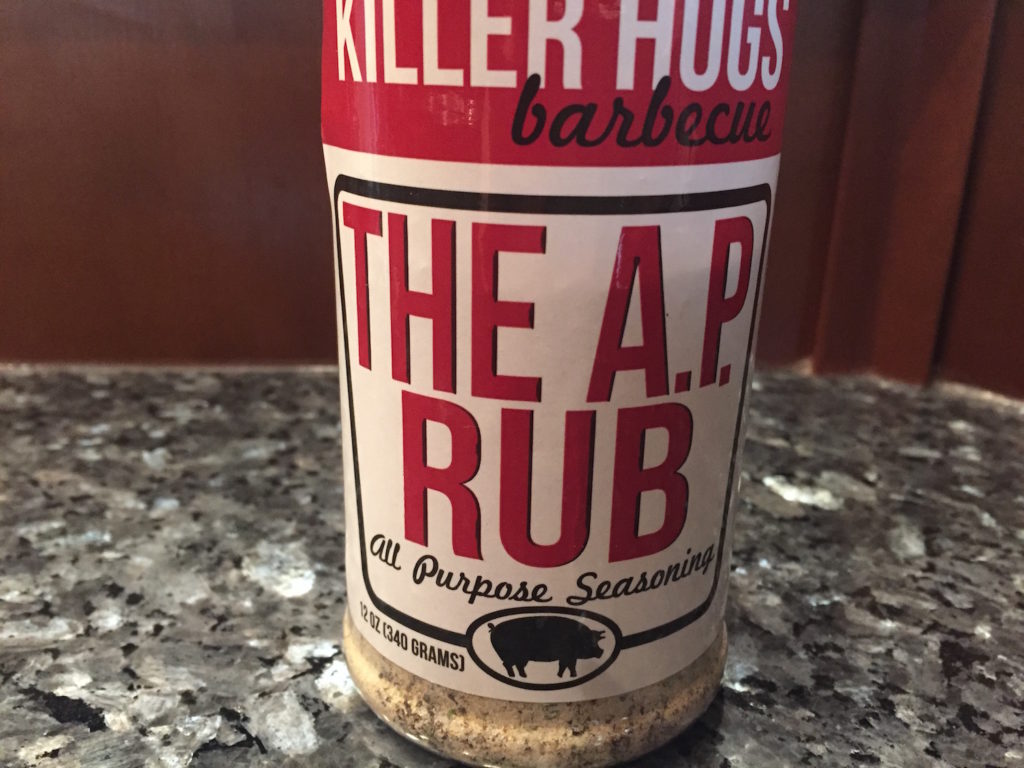 The ingredient list is deceptively basic (salt, garlic, spices, etc.); whatever magic they do in the mixing makes this an outstanding blend to put on every kind of meat. It works really well alone, and we’ve had several steaks dressed in nothing but A.P.

But what’s really got us going is the layering technique Killer Hogs suggests in their tutorials. We layered these three on a steak the other day, and couldn’t get over the robust flavour and colour. 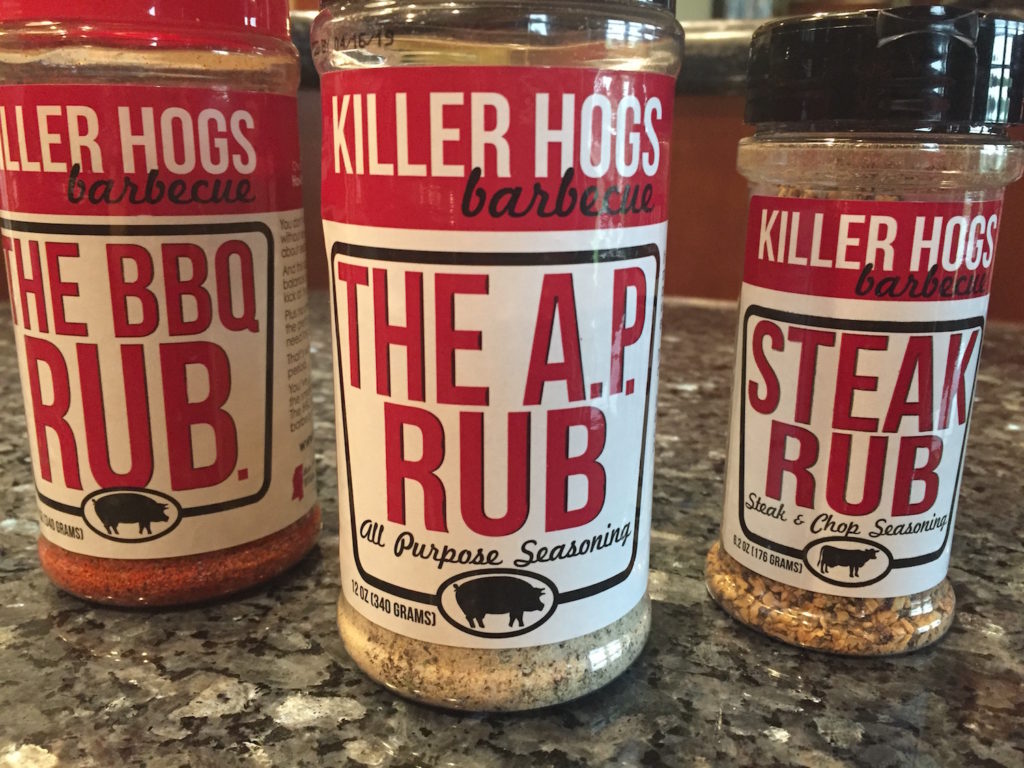 We’ve had fun around the grill combining the rubs in different ways (dialing back this, amping up that…) and haven’t gone wrong yet.

The sauces are also good bbq fun. The BBQ sauce, for instance, is loaded with smokey-sweet-fruity notes I haven’t tasted anywhere else. We do find though that the rubs are so darn good, there’s often no need to dip into the sauces, tasty as they are… 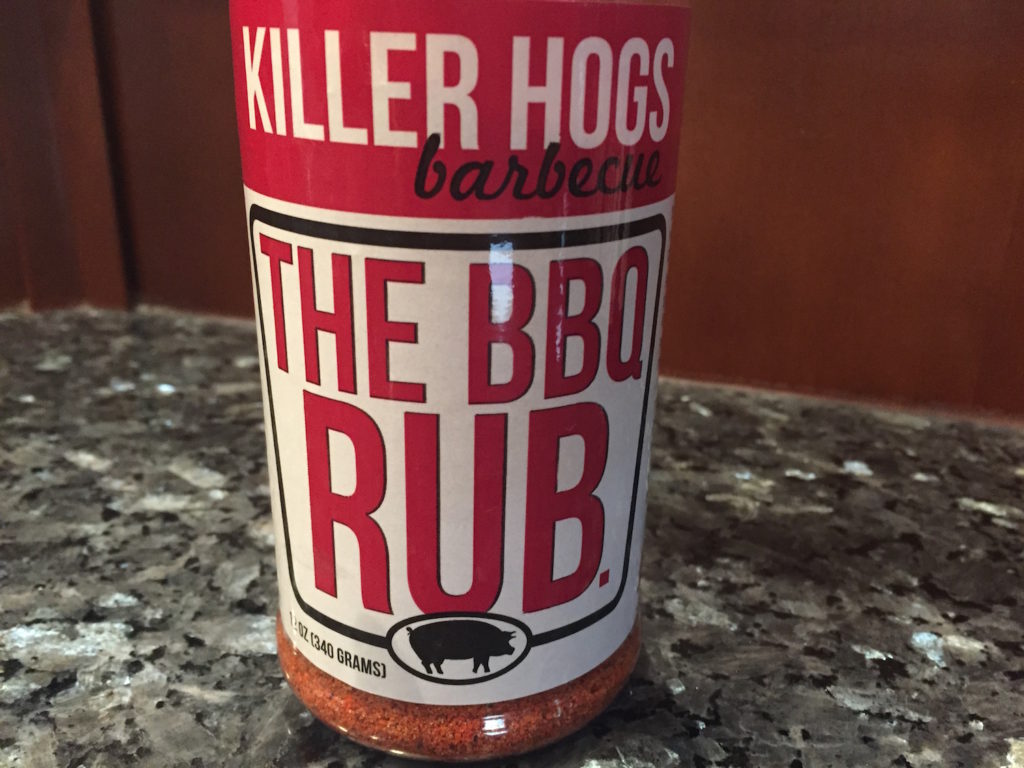 So do stop in here soon for most posts about this line of rubs and sauces soon as we’ll surely be doing more experimenting. (And head over to the Killer Hogs website for some truly inspiring bbq tutorials – definitely worth a look).

We love using our Weber Kettle Charcoal Grill, and Weber also makes a nice line of seasonings that are real crowd-pleasers around here. We’re loving Weber’s Gourmet Burger Seasoning lately, which is great on beef burgers of course, but also surprisingly tasty on chicken, too.

Our other go-to is Weber’s Kick’n Chicken Seasoning which is what we used last night on a mess of chicken legs (see below). It’s a blend of some reliable basics, like dehydrated garlic and onion, and red pepper, but there’s also some orange peel in the mix. Gives it a hint of fresh-tasting citrus and some nice colour. What’s not to love? 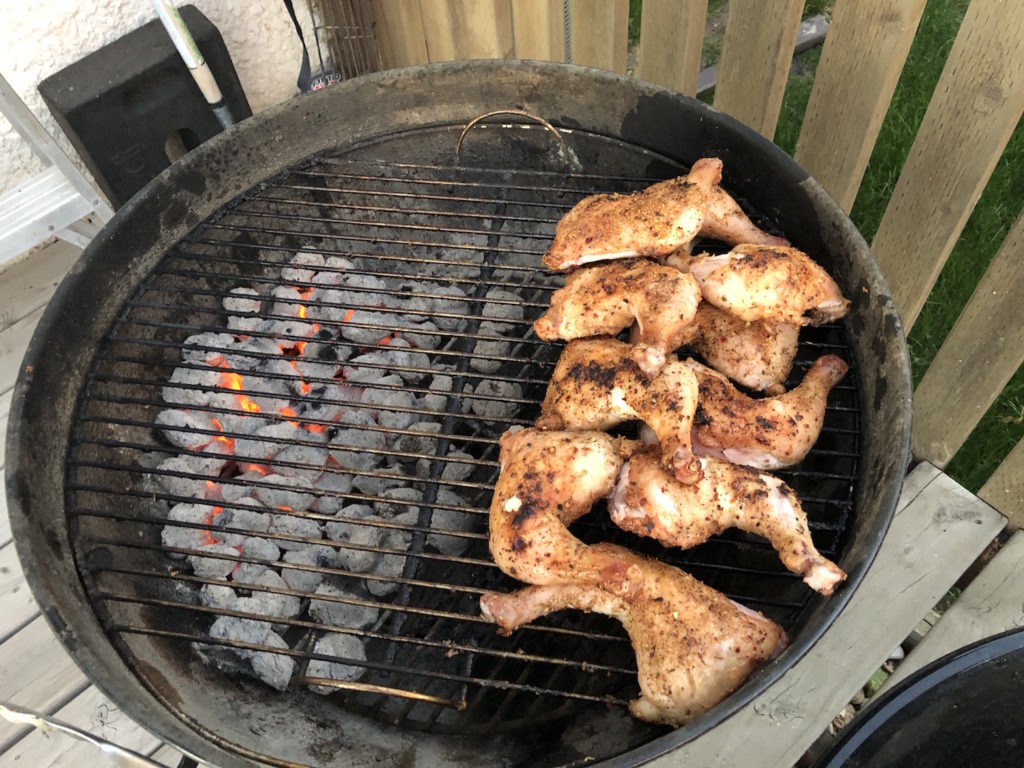 To round out dinner, we cooked up a skillet full of fresh peas and shallots right on the grill for smashin’ alongside the meat. (Looks nice, too.) Peas and Shallots in a Skillet on the Grill

…And here it is moments before we sat down to eat. Not sure how well the color on the chicken skin shows up in the picture, but this seasoning gives the chicken a pleasant warm orange hue. So, while it’s fun to get creative mixing up this and that in the kitchen to create cool rubs and spice blends, it’s also great (and a super timesaver) to find a reliable line of seasonings that you can count on to bring the flavor in a hurry. Nice job, Weber. 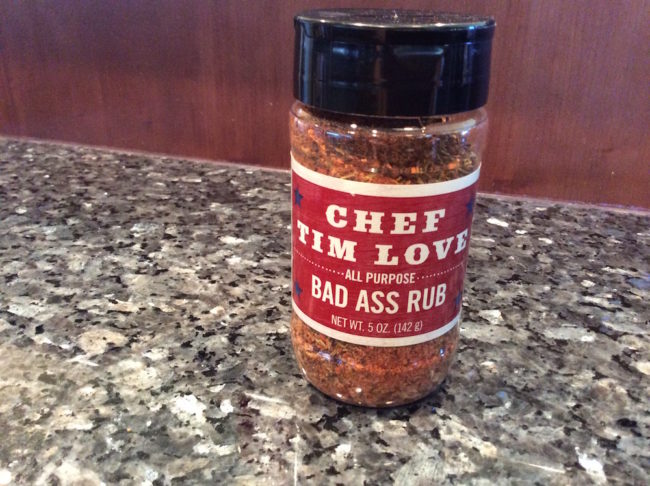 A few weeks ago, we received our awesome new PK 360 Grill and Smoker. (Check out our ‘unboxing’ post – and more to come about the tasty results…) There was a Father’s Day special going on when we ordered, and one of the sweet bonuses was a trio of premium spice rubs from Chef Tim Love.

So far we’ve only cracked open the Chef Tim Love All Purpose Bad Ass Rub for some tasty pork side ribs, but man it’s made us eager to try the rest – it was absolutely excellent. (You know when you sample something just to see what it’s like and then you have to keep going back to ‘check’ it a few more times to make sure? Yeah, you’re sure.)

Personally, I love cumin and there was a strong hit of it in this rub right off the top. There’s definitely a reverberating kick from this bad ass too, thanks to the guajillo chile (hot and spicy). Grounding it and rounding out all the flavours are herbs like rosemary and thyme, so you get some herby, earthy goodness, too. And ain’t it pretty to look at? Here it is rubbed into the pork side ribs ready for the smoker with a spicy, all-natural orange glow…mmmm… 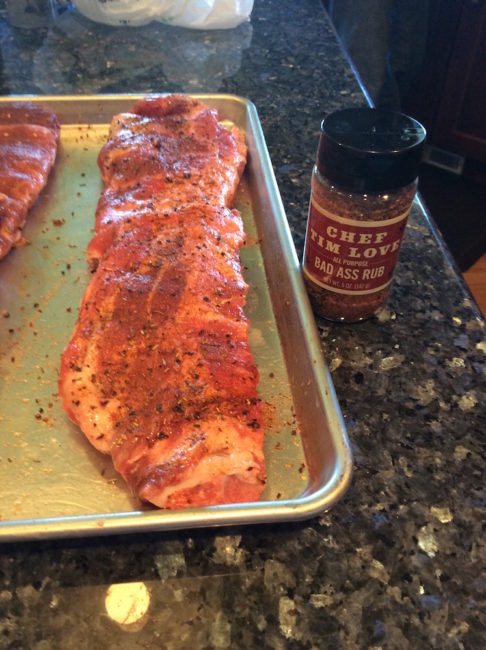 We totally loved the blend right out of the bottle, but the way the Bad Ass Rub mellowed and evolved after a few hours of smoking was ingenious. All that great flavour was still there and you still got some heat, but now it was seriously complementing and in no way overpowering the ribs. I’m drooling as I write… Well done, Chef Tim Love – and thanks also to the folks at pkgrills.com for introducing us to a great rub. We’ll be trying the other rubs we got really soon – Chef Tim Love Steak Rub and Chef Tim Love Poultry Rub – so stay tuned, Nation! Make Your Own Sauce

Those that know me know that I love my Telecaster and that I love my sauce – so please don’t ask me to choose! But when I’m not working up and down the fret board of that sunburst Tele, I am quite likely to be working up and down a rack of baby backs. Telecaster players know that ‘the twang is the thang’ and those that love my sauces know that ‘the tang is the thang’. So when you gotta put ‘er down, get those ribs on low and slow and make this No Fussin’ No Frettin’ simple sauce from scratch.

What you will need:

1 ½ tablespoons vegetable oil
¼ cup chopped onion (whatever kind of onion you like)
5-6 cloves of garlic chopped or minced (Bubba loves his garlic!)
1 cup of ketchup
½ cup brown sugar
¼ cup cider vinegar
3 tablespoons Worcestershire sauce (Depending on my mood, I like to pump up the volume with another tablespoon or so…feel free to adjust to taste here)
1 tablespoon mustard (yellow or Dijon – a Hot Dijon is a nice twist)
1 tablespoon soy sauce
1 teaspoon chilli powder
Tabasco sauce or your favourite hot pepper sauce to taste.

Thanks for checkin’ this out! I’m definitely not the kind of guy who’s ever going to be tied down to one rub, especially not a commercially prepared one. There are just too many spice combos to try and whip up myself! However, every now and then Bubba comes across a spice blend he’s gotta write home about! So I’m gonna  tell you about a rub I discovered on a trip to Montreal, Canada to visit some buddies – Schwartz’ Steak and Beef Spice. I’m not saying it’s all I’ll ever use on my BBQ, but it did cause me to go through a bit of a “Schwartz’ phase”.

Now, before I go any further, I’ve gotta warn you that I have no idea if you can get this stuff anywhere but in Montreal. Still, it’s so good that I just had to share it with the Nation. If you find yourself there or have some friends or relatives who can get it and ship it to you, consider it. It’s really that good.

Schwartz’ is a hole in the wall delicatessen in downtown Montreal – one of these places with line ups around the block at any time of the day. They’re specialty is Montreal Smoked Meat, an awesome, greasy, spicy smoked meat that’s great with hot rye bread and an even hotter mustard (smoked meat is something you should definitely try when in Montreal. Schwartz’ is the “classic” place to go, but you can get it elsewhere, so I’ve been told).

So I’m eating my Smoked Meat Sandwich elbow to elbow with my friends and everyone else in the place, and I’m really into the spice on the meat. It’s a blend of all sorts of things, but what really stands out is the coarseness of all the herbs and spices, chunks of salt, peppercorns and garlic and mustard seeds and other good stuff. I don’t know about you but I find that a lot of commercial blends grind everything up so fine and let salt dominate the whole mess that there isn’t any pow left, if you know what I mean. Schwartz’ spice blend is still salty, but there are so many other things going on and they haven’t pounded the smack out of everything – this blend “gets it” and gets it right. (Side note – of course, finely ground chili powders, cumin, and paprika can all have their place in a rub – I’m talking about those packets that basically look and taste like fake fire-engine colored salt.)

So anyway, I’m eating my smoked meat sandwich, and I notice they actually sell their spice blend. Naturally, I buy a couple to take home as a souvenir, the best kind being the kind you can eat, of course. And I also buy a couple of their Poultry Spice Blend thinking that it’ll probably be good, too.

I take it home and try it out, first on steak. Whoa! It’s just awesome. And I’ve had a lot of steak with a lot of incredible homemade rubs in my time. This leads to me trying it on pork and burgers and even a beef roast. I’m even adding dashes of it to gravies and sauces as the week goes on. Pretty soon, I’m regretting picking up only two little bottles. And the poultry seasoning is no slouch either (less salty than the Beef Blend, more herbs). It’s great on chicken, and I even tried it on pork – I actually preferred the poultry blend on the pork.

They don’t actually list their exact ingredients, stating only that there are spices, garlic, salt and herbs. The good folk at Schwartz’ is protecting a secret lasting generations, I guess. But they’ve really hit on a genius blend of simple things.

Anyway, from a die-hard do-it-yourselfer, a rave review for a prepared blend is a rare thing. Then again, it’s a good family recipe and one that’s not available at any ol’ store, so I won’t feel too bad.

Next time you’re in Montreal, you know where to go. And if you are heading there, let me know, will ya? Now excuse me while I call up my Canadian buddy and see if he wouldn’t mind running down to Schwartz’, and then to the mail box for Bubba…