You are here: Home / Grill School / Reverse Your Approach to Grilling with the Reverse Sear

Steak that’s tender and juicy on the inside with a gorgeous, delectable crust on the outside. Sound good, right? In fact, it sounds perfect. That’s why you’ve got to try the reverse sear method.

Basically, the reverse sear method means smoking your meat low and slow at first, finish it off over the high heat of blazing-hot coals, and serve immediately. It may fly in the face of what you’ve heard all our lives (it did for us) – get the grill searing hot right away, throw the meat on for a few short mins on each side, then tent and rest. But, when you think about what we’re all after – juicy, beefy inside with a pleasing crust to seal it in – doesn’t the reverse sear make so much sense? 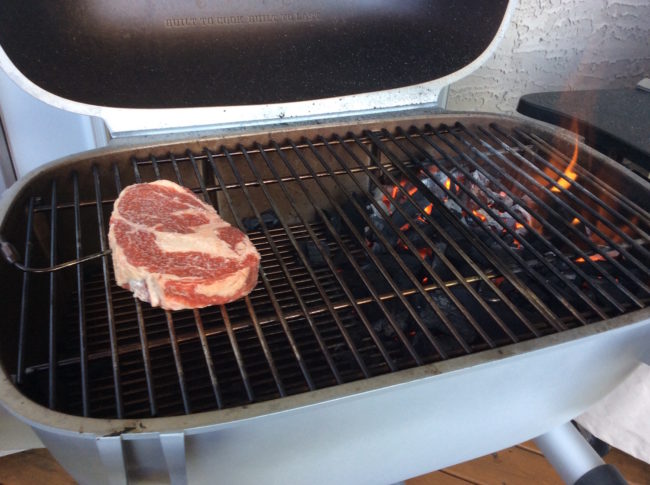 We grilled up a thick ribeye using this method on our PK Grill – which is the perfect grill to accomplish the reverse sear. Not only is setting up two different heat zones side by side is so easy – a ‘cooler’ indirect heat side for smoking, and a hot direct heat side built up with a neat pile of fiery charcoal for the sear – the adjustable vents allow you to harness the power of the hot coals to turn the cool side into a smoker.

We really like the degree of control we have over temperature and smoke due to the adjustable vents on this unit (two in the lid, two underneath) which you can open or close to get things just right. We created direct and indirect sides in our PK Grill by opening the lower right side vent (the one underneath the coals for the searing stage) and also opening the “opposite” vent (the upper left vent), keeping the other two vents (lower left and upper right) closed. This allowed air to come in through the lower right vent to superheat the coals. It also allowed the smoke from the hot side to be drawn toward the open upper left vent, drifting over the steak while it cooked on the indirect heat side — and thus smoking it low and slow. 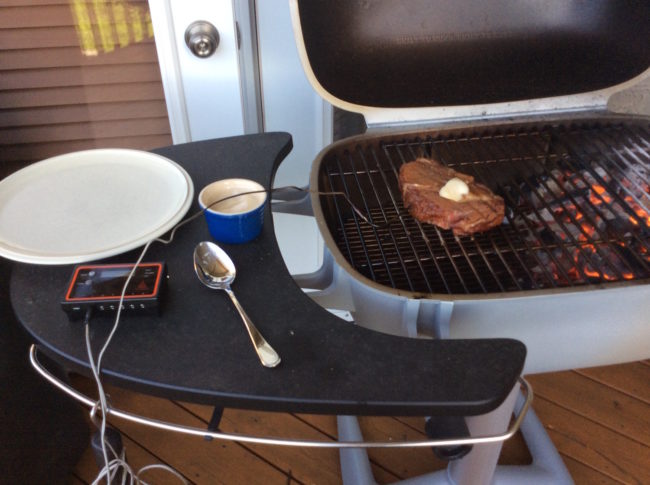 In terms of numbers, we aimed to get our indirect heat side to about 250 degrees Fahrenheit. Again, we could achieve this level of precision by adjusting the vents described above and monitoring the temperature of the grill and the meat with our handy Fireboard digital thermometer (read our Fireboard post for more info). Our ribeye smoked on the indirect heat side for ~25 minutes, with the lid closed of course. We monitored the temperature of the meat (also with the Fireboard thermometer) and cooked it until abou1 110 degrees before the sear stage (we were aiming for a final temp. of ~130 degrees for a beautiful medium rare). 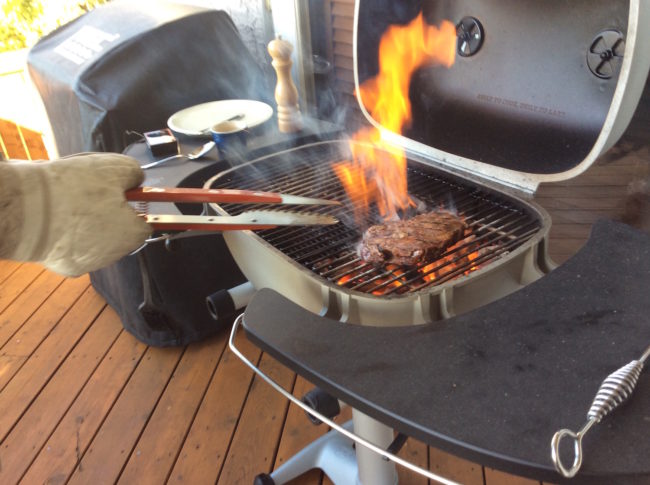 The direct heat side took about one chimney starter full of charcoal, and we tossed on a block of white oak for good measure. When we were ready to get the situation sear worthy, we opened up the lid as well as all the vents and got our coals as hot as hot can be. (For added ribeye yum, we used the decadent technique of slathering the meat with bacon fat just before putting it on the high heat. The salty, bacon-y goodness melts into the steak which will soon melt in your mouth.) Not surprisingly, we got some flare up with all that fat and heat (which looks dang cool in pictures, right?, and they key was turning them meat often – every five or ten seconds – for not much more than a minute, in order to caramelize and not burn the outside.

The next critical step is to serve a.s.a.p – no resting. With the traditional high heat/short cooking time method you’re resting the meat to get the juices that have be retreated center-ward from the heat to redistribute inside. With the reverse sear, there’s no need because the meat has basically cooked slow and low with a quick sear at the end (thus no panicky, retreating juices). In the end our reverse-seared ribeye was off-the-hook tasty.

Glorious! (So glorious, in fact, we needed to pair it with a gorgeous wine from Bordeaux – a 2006 Chateau Monbousquet from Saint Emilion. A dinner for the ages!) 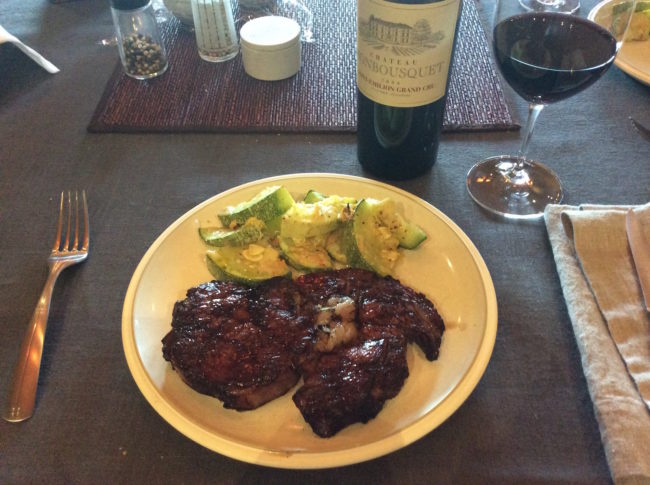 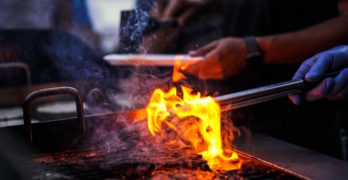